When the Union strikes…

One of my favorite sessions from #SHRM13 was “A Portrait of a Modern Labor Dispute”. There are sooooo many reasons why I enjoyed this presentation. Some matter and some don’t.

1) Hope is adorable. She’s just fun to be around and she’s so sweet.

2) I feel like we have a bond through a previous employer of mine.

6) Cliff has a snarky sense of humor that I happen to enjoy.

The story they shared with us was the violent labor dispute between EGT and ILWU. EGT opened a facility in an area that the ILWU claimed fell in their territory and EGT chose to not staff their facility with ILWU workers and things got ugly. What they showed us was real footage. It’s the stuff the union reps don’t share with your employees when they are trying to infiltrate your organizations. I can remember a few years back at an AL State SHRM conference the speakers that closed the conference were two former union guys that shared their secrets with a room full of HR pros on how they would turn facilities. The stuff they shared with us was mind-blowing! Black mailing executives, threatening managers, harrassing employees, some real dirty stuff. And this specific example between EGT and ILWU is a prime example of how manipulative and ill-natured the union can be when they strike.

Here in AL we are a “right to work state” so I have stumbled upon plenty of HR pros that think their facilities won’t go union because of that. My own digging has turned up quite the opposite information. We happen to have a large presence of union reps going after plenty of facilities in AL, specifically in south AL where we have more automotive facilities. They are persistent, they are hardcore, they do not give up. So, how will you handle that?

Here’s the deal, we all hope that our facilities won’t go union, but what would you do if it did? What would you do if it did go union and your facility had to deal with union protests? How would you handle a stack of grievances every week? How will you handle the unions intimidation tactics? How are you preventing this from happening? Unions are not just a manufacturing facility problem either, if you think that you are living under a rock in a nice cozy HR office with no windows or doors. As a disclaimer let me just add that not all unions are nasty and untrustworthy and neither are all union employees. A lot of times employees join a union because they don’t know any better or maybe because their dad did and his dad did and so on. But, the word “union” typically paralyzes an HR professional. There are so many things that we want to say to our employees that we are prohibited from saying so we freeze up and chase our tails waiting for the whole thing to play out. That is not okay.

What Hope and Cliff of Thompson Coburn LLC did was fight for their client. They didn’t negotiate some kind of deal and tell their client to abide by the ILWU’s wishes. They pushed for what was right, when no one was on their side. Even when local law enforcement chose to stay out of it, they continued to push for what was right. I think that’s outstanding and we don’t see that enough from companies & attorneys. We don’t see companies willing to battle something out until the end because they are afraid of negative headlines. I believe that organizations should fight when they haven’t done anything wrong and these attorneys felt that way about this particular case. They did a wonderful job presenting to the group! These are people you want in your corner when you’re in a fight like this, no doubt.

Do you have any union experiences to share? As previously mentioned, I’m completely fascinated by unions so please do share! 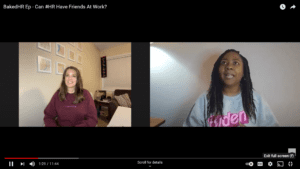 The blog has been quiet for a while now, even though it went through a really great makeover earlier this year (you could book your